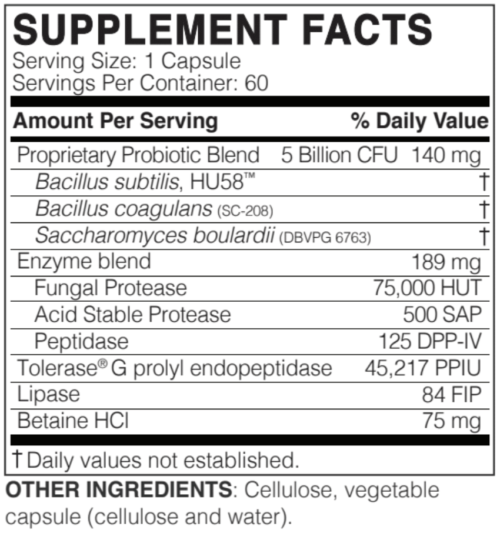 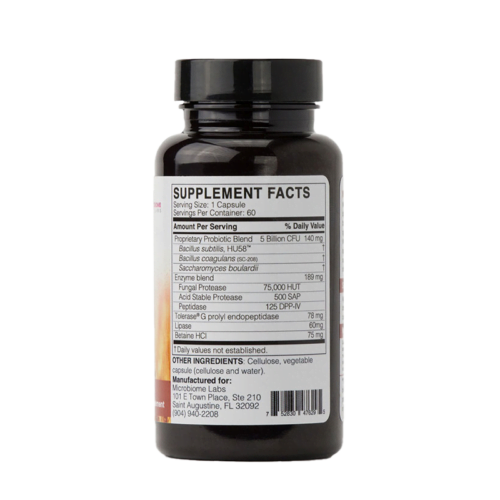 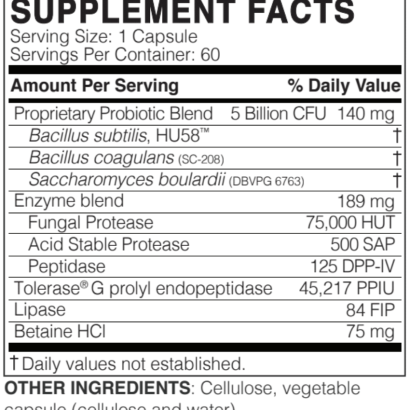 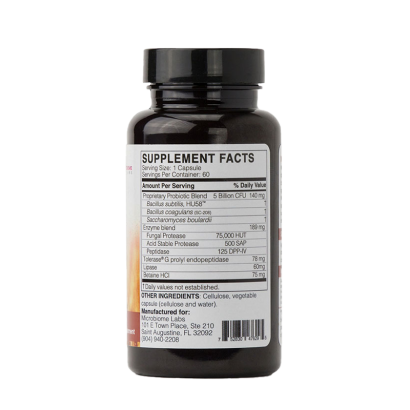 Microbiome Labs – WheatRescue™: Gluten is a combination of two storage proteins, glutenin and gliadin, that are found in the middle layer, or endosperm, of various cereal grains.

Normally, the pancreas secretes digestive enzymes, like proteases and peptidases, to help break down proteins like gluten. However, imbalances in gut bacteria and the normal aging process can limit the body’s natural ability to produce these necessary digestive enzymes.

WheatRescue™ is a unique blend of powerful digestive enzymes and probiotics designed to support optimal gluten digestion and protect against hidden sources of gluten.

DPP-IV and Tolerase G® are specific enzymes that assist in the breakdown of glutenin and gliadin proteins, which can help alleviate symptoms associated with dietary gluten intolerance and sensitivity.

WheatRescue™ combines resilient probiotic spores with superior digestive enzymes to support the complete digestion of gluten and other inflammatory wheat-derived peptides within 60 to 90 minutes.

There’s no denying that gluten is problematic for many people. Many doctors will suggest a strict gluten-free diet, but recent discoveries have revealed this may not be enough. New research suggests that the small intestines of up to 60% of adults with celiac disease never completely heal despite following a gluten-free diet.

This could be due in part to gluten contamination in many “gluten-free” foods.

Dr. Tom O’Bryan gives us a rundown and why NEW WheatRescue is an important supplement for people with gluten intolerance:

A recent study examined 5,624 foods tested by 804 users and found that 32% of foods labeled “gluten-free” contained measurable amounts of gluten. Interestingly, gluten-free pizzas and pasta were the most likely to test positive for gluten with over 50% of samples showing gluten contamination.

Another study from 2009 examined 465 celiac subjects who adhered to a gluten-free diet for 16 months and found that total restoration of the intestinal damage inflicted by gluten was exceptionally rare (roughly 8%) in adult celiac patients despite following a gluten-free diet.

These findings suggest that while a gluten-free diet can help to prevent further damage, the avoidance of gluten alone is not sufficient for total gut restoration.

A combination of probiotic spores and yeast can effectively support intestinal health and barrier function:

Saccharomyces boulardii is a probiotic yeast that can help support digestive health by producing lactate, B vitamins, and targeted antimicrobials to defend against pathogenic gut infections.

S. boulardii has also been shown to be immunoprotective through the upregulation of IgA and IgG secretions in the intestines.

Bacillus coagulans and Bacillus subtilis are spore-forming probiotics that are naturally designed to survive digestion, support intestinal barrier function, and enhance the microbial diversity of the gut microbiome.

B. coagulans is very unique in that it possesses characteristics of both Bacillus and Lactobacillus genera. It functions as a lactic acid-producing bacterium with the protection and survivability of a Bacillus spore.

Bacillus subtilis HU58™ provides potent immune modulation and has been shown to reduce pro-inflammatory cytokines IL-6 and TNF- and significantly increase the production of short-chain fatty acids (SCFA) such as butyrate, acetate, and propionate in the gut.6 Butyrate is the major energy source for colonocytes and has been studied for its role in nourishing the colonic mucosa.

A recent study published in Scientific Reports concluded that microbially-derived byproducts like butyrate and lactate can be used to modulate the epithelial response to gluten by improving barrier function and reducing gliadininduced cytokine secretion.

When it comes to facing the dangers of gluten, WheatRescue™ is here to save the day. WheatRescue™ offers complete digestive support, superior protection, and peace of mind concerning gluten.*

Ages 8+: Take 1 capsule with a meal 3 times daily. Children under 8 years of age please consult with your healthcare practitioner.

All product text sourced from microbiomelabs.com.

Dosage: Ages 8+: Take 1 capsule with a meal 3 times daily. Children under 8 years of age please consult with your healthcare practitioner. 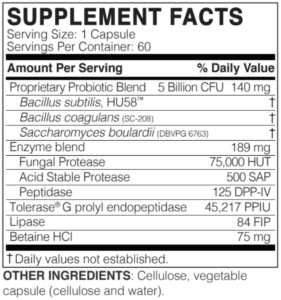 Ages 8+: Take 1 capsule with a meal 3 times daily. Children under 8 years of age please consult with your healthcare practitioner.