Optimize your liver’s ability to detoxify and purge toxins with a blend of powerful antioxidants, nutrients, and enzymes that boost this critical organ’s health.

The Body’s Filter and Protector

The liver may be the single most important organ in the body for supporting overall physical health. It is the largest organ in the body (besides the skin) and has an enormous amount of blood flowing through it every moment. It cleanses the bloodstream, with its Kuppfer cells acting as the filter, and is of vital importance to immunity and energy production. The liver is best known for its role in detoxification, transforming substances like ammonia, metabolic waste, drugs and chemicals, so that they can be excreted. The liver is also the source of bile, which functions to break down fats. It is a source of energy, storing glucose in the form of glycogen which is converted back to glucose. Metabolizing carbohydrates, proteins and fats, making food available to the body for energy, tissue building, activating enzymes…the list of the liver’s functions is long and reinforces the point that we need to protect it!

The liver’s primary function involves promoting the removal of toxins and waste from the body. However, the liver also regulates the metabolism of things like bilirubin, hormones, drugs, and cholesterol. Additionally, the breakdown of proteins, carbohydrates, and fats occurs in the liver, along with enzyme activation. The production of important proteins and the storage of vitamins, minerals, and glycogen takes place in the liver as well. This vital organ supports optimal health and well-being when it is working properly. Respect it. And optimize your well-being.

If the liver’s ability to carry out its critical processes becomes compromised, toxins, cholesterol, waste, and other harmful particles may quickly begin to accumulate in various parts of the body. Certain factors, such as an unhealthy diet, or consuming large amounts of alcohol regularly, can actually lead to an abundance of toxic particles the liver cannot process fast enough. Furthermore, processed foods, air and water pollution, alcohol, drugs, and many other substances like chemicals and heavy metals, bombard us with massive quantities of toxins on a routine basis.

Eating a nutritious, well-balanced diet is one of the best ways to ensure that the liver remains clean and fully functional. Taking a nutritional supplement with key micronutrients enhances this function by promoting whole body cleansing. Support Liver contains a combination of amino acids, enzymes, and antioxidants that help your liver to do its job against the odds of a toxic world.

Support Liver is formulated with well-researched ingredients that reinforce important processes in the liver. These powerful active ingredients also target harmful substances or foreign invaders that may damage the liver. These key properties heighten liver function and overall health.

This sulfur-containing amino acid is the primary methylating agent in the liver. The importance of methylation cannot be overstated. Methylation is the biochemical process in which certain molecules transfer or donate a methyl group (-CH3) to other molecules.

The effectiveness of N-Acetyl-Cysteine (NAC) is primarily attributed to its ability to reduce extracellular cystine to cysteine, or to act in the cells as a source of sulfhydryl groups.

It is the major amino acid required for the removal of toxic chemicals and metabolites from the body and is an essential component of cell membranes, where it plays a role in stabilizing transport across cell membranes.

The most abundant and required antioxidant in the body, glutathione (GSH) is synthesized from the amino acids glycine, L-cysteine, and glutamic acid.

Recommended Use:
Adults: As a dietary supplement, take 3 capsules one half hour before breakfast. For more specific recommendations, please consult your healthcare professional. 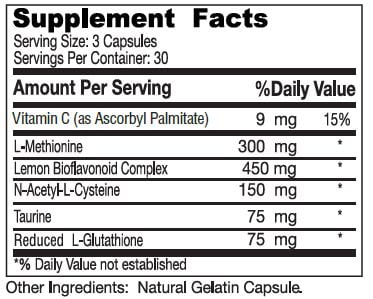